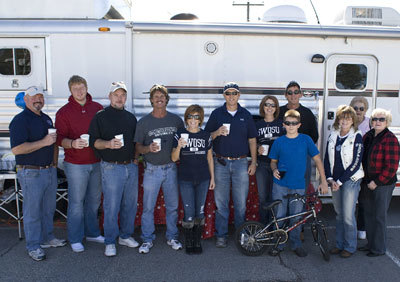 One of the usual sights this year at SWOSU football games has been the tailgating unit of Jay and Jonelle Johnson (center) of Duncan. Their son, Houston Johnson, is a freshman on the Bulldog football team, which plays their final home game this Saturday, November 7, at 2 p.m. in Weatherford. Among the tailgaters at last Saturday's game were (from left) John Olivarez, Jake Smith and Vern Smith, all of Edmond; Robert Corbin, Newcastle; the Johnsons; Jyna Vaughn, Josh Lawrence and Lynn Vaughn, all of Comanche; and Sherry Wright, Marchetta Wright and Barbara Ray, all of Aledo, Texas.