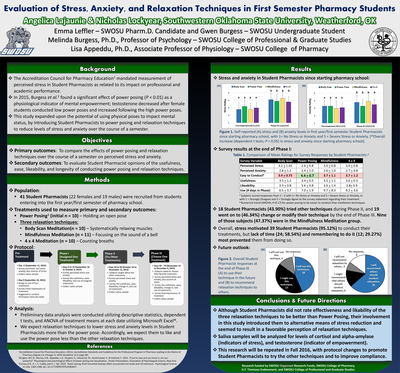 The objective was to introduce Pharmacy students to relaxation techniques which could potentially reduce levels of stress and anxiety over the course of Fall 2015. Subjects were recruited from students entering into the first semester of Pharmacy school (N = 41). Baseline stress and anxiety levels were taken prior to the start of exams. Next, subjects were randomly assigned to one of four treatments - a meditation technique (body scan, n= 10; mindfulness, n= 11; or 4 x 4, n= 10) or comparator (power posing, n= 10). For three and a half weeks, subjects were encouraged to conduct their treatments at least twice per week. For the following 8 weeks until the week before finals, subjects had the choice to keep or modify their assigned technique, or to change to another means of relaxation. As hypothesized, subjects perceived they endured a greater amount of stress (P< 0.05) and anxiety (P< 0.05) since starting Pharmacy school later in the semester as compared to beginning. However, there was no significant differences (P>0.05) in levels of stress or anxiety levels across the four treatments. There was a trend for subjects to rate power posing to be easier to conduct than the meditation techniques during the initial study phase. We will further investigate and present changes made to the assigned treatments, as well as subsequent student perceptions regarding the usefulness, ease, and likeability of performing relaxation techniques.