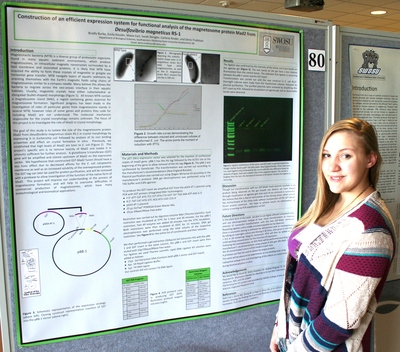 Magnetotactic bacteria (MTB) is a diverse group of prokaryotic organisms which produce magnetosomes, intracellular magnetic nanocrystals surrounded by a lipid membrane. MTB navigate layers of aquatic sediments by orienting themselves with the Earth's magnetic fields using chains of magnetosomes similar to a compass needle. The goal of this study is to investigate the role of the magnetosome protein Mad2 from Desulfovibrio magneticus strain RS-1 in crystal morphology by expressing it in Escherichia coli followed by analysis of its iron binding properties and effect on crystal formation in vitro. Previously, we established that high levels of Mad2 are toxic to E. coli. This project's specific aim is to remove toxicity of Mad2 and isolate it in amounts sufficient for further analysis. A glutathione S-transferase (GST) gene will be amplified and cloned upstream of mad2 on the expression vector. We hypothesize that constructed GST- Mad2 fusion should have less toxic effect due to decreased affinity for the E. coli cytoplasmic membrane as well as increase solubility of the overexpressed protein. The GST tag can later be used for protein purification, and will be removed with a protease to allow investigation of the function of the native form of Mad2. This project will improve our understanding of the process of magnetosome formation, and will help to overcome difficulties in commercial production of magnetosomes which have many biotechnological and biomedical applications.