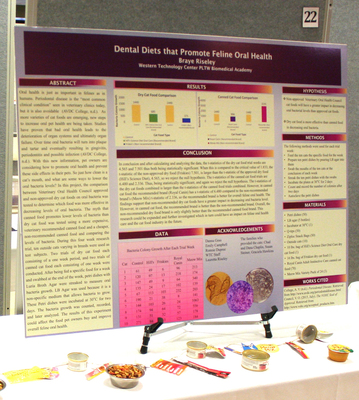 Oral health is just as important in felines as in humans. As more varieties of cat foods are emerging, new steps to increase oral pet health are being taken. Studies have proven that bad oral health leads to the deterioration of organ systems and ultimately organ failure. Overtime oral bacteria will turn into plaque and tartar and eventually resulting in gingivitis, periodontitis and possible infection. With this new information, pet owners are considering how to promote oral health and prevent these side effects in their pets. So just how clean is a cat's mouth, and what are some ways to lower the oral bacteria levels? In this project, the comparison between Veterinary Oral Health Council approved and non-approved dry cat foods on oral bacteria was tested to determine which food was more effective in decreasing levels of oral bacteria. The myth that canned food promotes lower levels of bacteria than dry cat food was tested using a more expensive, veterinary recommended canned food and a cheaper, non-recommended canned food and comparing the levels of bacteria. During this four week research trial, ten outside cats varying in breeds were used as test subjects. Two trials of dry cat food each consisting of a one week period, and two trials of canned cat food each consisting of one week were conducted. After being fed a specific food for a week and swabbed at the end of the week, petri dishes with Luria Broth Agar were streaked to measure oral bacteria growth. LB Agar was used because it is a nonspecific medium that allows bacteria to grow. These petri dishes were incubated at 30°C for two days. The bacteria growth was counted, recorded, and later analyzed. The results of this experiment could affect the food pet owners buy and improve overall feline oral health.