The Effect of Color on Taste 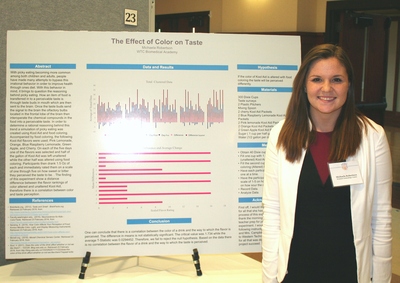 With picky eating becoming more common among both children and adults, people have made many attempts to bypass this irrational behavior in order to improve health through ones diet. With this behavior in mind, it brings to question the reasoning behind picky eating. How an item of food is transferred in to a perceivable taste is through taste buds in the mouth which are then sent to the brain. Once the taste buds send the signal to the brain the olfactory bulbs located in the frontal lobe of the brain then interpenetrate the chemical compounds in the food into a perceivable taste. In order to determine a rational reasoning behind this trend a simulation of picky eating was created using Kool Aid and food coloring. Accompanied by food coloring, the following Kool Aid flavors were used: Pink Lemonade, Orange, Blue Raspberry Lemonade, Green Apple, and Cherry. On each of the five days, one of the flavors was selected and half of the gallon of Kool Aid was left unaltered while the other half was altered using food coloring. Participants then drank 1.5 Oz of each and immediately rated them on a scale of one through five on how sweet or bitter they perceived the taste to be. The finding of this experiment should show a distinct difference between the flavor rankings of color altered and unaltered Kool Aid, therefore there is a correlation between color and taste perception.