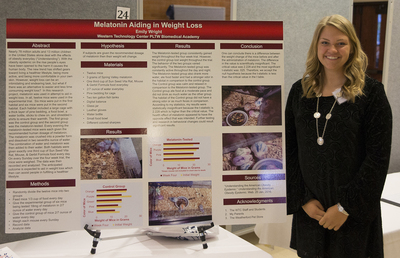 Nearly 78 million adults and 13 million children in the United States alone deal with the effects of obesity everyday. With the obesity epidemic on the rise people's eyes have been opened to the harm it causes the human body. The new trend has shifted gears toward living a healthier lifestyle, being more active, and being more comfortable in your own skin. However, weight loss can be an intimidating and endearing task, but what if there was an alternative to easier and less time consuming weight loss? In this research project, melatonin was used in attempt to aid in weight loss. In all, twelve mice were used in the experimental trial. Six mice were put in the first habitat and six mice were put in the second habitat. Each habitat included a large cage with a thick layer of pine bedding, a food bowl, a water bottle, sticks to chew on, and shredded t-shirts to ensure their warmth. The first group was the control group and the second group was the melatonin-tested. Every evening the melatonin-tested mice were given the recommended human dosage of melatonin for each mouse. The melatonin was crushed into a powder form and dissolved in two sevenths an ounce of water. The combination of water and melatonin was then added to their water. Both habitats were given exactly one third a cup of Sun Seed Vita Rat, Mouse, & Gerbil Formula food every day. On every Sunday over the four week trial, the mice were weighed. The data was then recorded and analyzed. The anticipated outcome is expected to aid in weight loss which then can assist people in fulfilling a healthier lifestyle.