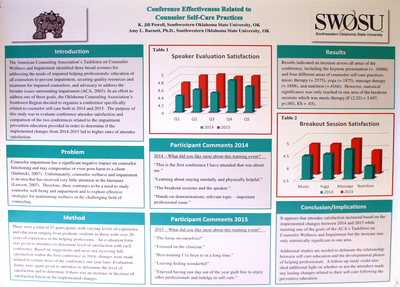 In an effort to address the goal of education of all counselors to prevent impairment as set forth by the American Counseling Association's Taskforce on Counselor Wellness and Impairment (ACA, 2003), the Oklahoma Counseling Association's Southwest Region organized a conference specifically related to counselor self-care in 2014 and 2015. The purpose of this study was to ealuate conference attendee satisfaction and compare the two conferences related to the impairment prevention education provided in order to determine if the implemented changes from 2014-2015 led to higher rates of attendee satisfaction. To do this, an evaluation form was given to attendees to determine level of satisfaction with each conference. Changes were implemented at the 2015 conference based on suggestions and areas not receiving full satisfaction at the 2014 conference. Evaluation forms were again given to attendees to determine the level of satisfaction and to determine if there was an increase or decrease of satisfaction based on the implemented changes. An analysis of data variation to determine an increase, decrease, or lack of variance in data findings was performed; and the results indicated an increase across all areas of the conference, including the keynote presentation (+. 19488) and four different areas of counselor self-care practices: music therapy (+.2575), yoga (+.1875), massage therapy (+.1888), and nutrition (+.4166). As evidenced by the results, it appears that attendee satisfaction increased based on the implemented changes between 2014 and 2015, while meeting one of the goals of the ACA's Taskforce on Counselor Wellness and Impairment.