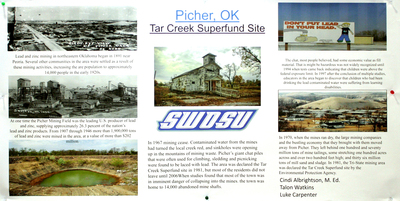 There was a time when Picher, Oklahoma, was a booming mining town. People from across the country were moving to Picher to earn their share of the profits that continued to come from under the ground in the form of lead and zinc alloys. During the boom, the mines yielded the majority of the lead used to produce bullets during World War I and World War II. In 1981, the area was declared the Tar Creek super fund site by the Environmental Protection Agency. The vast majority of the population stayed put in Pitcher until the discovery of dangerous amounts of lead in the water in 2006. The remaining residents became concerned when educators discovered that the children of Picher were suffering from learning disabilities that were believed to be directly related to the lead contamination. Studies found that the town was in imminent danger of collapsing into the 14,000 abandoned mine shafts that cover forty square miles in and around Picher. The US government offered the remaining residents $55 a square foot to evacuate and relocate. In 2009, the Post Office and the Police Department closed and shortly after the city ceased operations as a municipality. In 1983 the EPA ranked Picher as the country's most hazardous Superfund site. The EPA began a remediation effort in 1996, spending more than one-hundred and fifty million dollars.