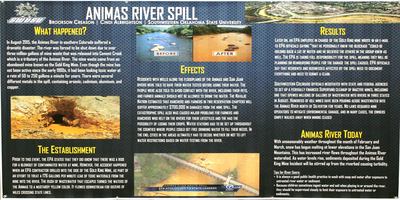 In August 2015, the Animas River in southern Colorado suffered a dramatic disaster. The river was forced to shut down due to more than 3,000,000 gallons of mine waste being released into the Cement Creek which is a tributary to the Animas River. The accident happened when an EPA contractor drilled into the side of the Gold King Mine. The spill not only affected the value of the river to the businesses in the area due to a loss in revenue from river rafting, kayaking and fishing, but also human and animal life. The EPA is taking full responsibility for the spill. Prior to this event, the EPA stated that they did know that there was a risk for a blowout of contaminated water at the mine. Later, an EPA employee in charge of the Gold King Mine wrote in an email to EPA officials saying, "that he personally knew the blockage could be holding back a lot of water and he believed that others knew as well." The rush of wastewater turned the waters of the Animas River a mustardy yellow color.