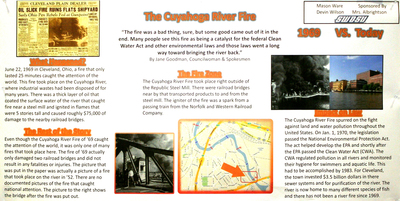 The Cuyahoga River Fire on June 22, 1969 in Cleveland, Ohio left a city in ruins after an oil slick caught fire due to all of the industrial pollution. This fire caused about $100,000 dollars' worth of damage. Obviously the fire was a big deal, but what really gave this so event so much attention? After all, history tells us that the pictures you see of a ship engulfed in flames was actually from a previous fire and that there are no known documented pictures of the famous Cuyahoga River fire. This fire caught the attention of many and spurred on the attitude that began to change in the 1960's that would come to be known as environmentalism. This catastrophe opened the eyes of many people when it came to dumping industrial waste into rivers. This was only one of many fires that happened in the river; however, the Cuyahoga caught the attention of the world. The world cares about polluting the waters because this is the water that was a thriving eco system, transportation for many industrial goods, and the drinking water for the people. The main problem that needs to be solved with this eye-opening catastrophe is trying to stop or at least trying to regulate these different types of pollution before they get out of control, especially in this case when industrial waste had polluted a river bad enough to actually make it go up in flames. The final outcome of the Cuyahoga River Fire was a push towards what is known now as environmentalism. These are the people that push towards safer ways of disposing wastes, transporting wastes or chemicals, and protecting the people. This catastrophe put a huge push on making everything more environmental friendly, safer for the public, and safer for future generations.