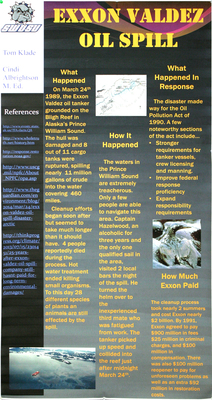 The Exxon Valdez oil spill was one of worst spills in history. On March 24, 1989, the oil tanker grounded on the Bligh Reef in Alaska's Prince William Sound . The hull burst open and spilled nearly 11 million gallons of crude oil into the water. At least 28 types of plants animals were impacted by the event. The captain of the Exxon Valdez tanker, Joseph Hazelwood, was reported to be under the influence of alcohol the night the accident took place. Hazelwood was the only one qualified to navigate the waters, but turned the helm over a fatigued and inexperienced crewmember. There was also some debate in how the cleanup process should have been handled. Some people believe that nature should have taken its course and the problem would fix itself with the violent storms of the Alaskan coast. The National Oceanic Atmospheric Administration studied in 1974 during the Amoco Cadiz disaster that spilled almost 68 million gallons in coast France. From this study, they found that the major impacts of that spill had disappeared. The most notable changes from the accident included the creation drug and alcohol testing programs for more dangerous positions, restricted dangerous work to employees with no history of substance abuse, and strengthened training programs for vessel captains and pilots. Exxon had set aside $4.3 billion for the accident and reportedly compensated for more than 11,000 Alaskans within the year of the spill, however 32 thousand people were reportedly affected by the spill in the whole country and 20,000 of those people lived in Alaska. References www.wholetruth.netcorporate.exxon.com - The Valdez Oil Spill response.restoration.noaa.gov ngm.nationalgeographic.com