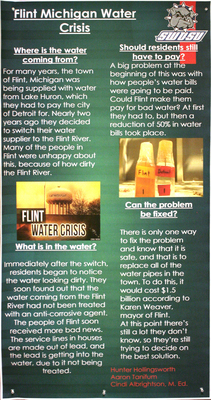 We are researching the Flint Michigan water crisis. The town of Flint switched their water supply to a new source in 2014, and they have had problems with lead ever since. We are doing this project to study the effects that the environment can make on our everyday life. What Flint is going through is a perfect example of this. In 2014 Flint Michigan had an idea to save money. They switched where they got the town's water supply from. They had previously got it from Lake Huron, but they were switching to the Flint River, which was a river that ran through the town and everyone knew it was dirty. Soon the water began to look brown and dirty as people would use it in their house. The water contained lead. It water was not treated correctly, so that resulted in the lead on the services lines in the homes making its way into the water. The people in the town of Flint were told that the water was fine, but with more research they found out that it definitely wasn't. This is a problem that couldn't be left alone, so officials began to work on it.