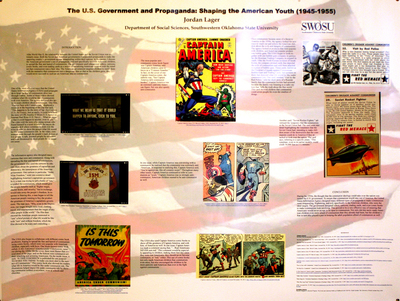 After World War II, the relationship between the United States and the Soviet Union was extremely tense. Both the Soviet and American governments manipulated propaganda to make the opposing country's government appear unappealing within their nations. In this paper, I discuss the American government's use of propaganda, directed specifically towards American children, to spread the fear and hatred of communism. I explain the government's use of educational videos, cartoons, comic books, and even trading cards as a means of socializing American children with the mindset that communism was a fatal idea. The American government targeted children in order to implant them with the mentality that communism was a dangerous idea so that as the children grew, they would never succumb to such an un-American idea as communism.