A New Kind of Playground: Youth Involvement in the Civil Rights Movement 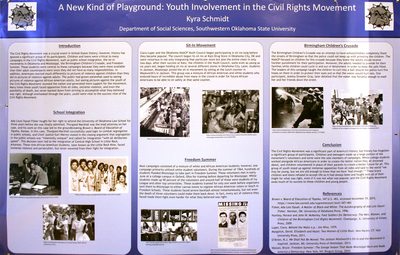 The Civil Rights Movement was a crucial event in United States history; however, history has ignored a significant group of participants. Youth, such as children and teens, were critical to many campaigns in the Civil Rights Movement, which, would not have been as successful, or happened at all, without their participation. This group was essential in public school integration, the sit-in movements in Oklahoma and Mississippi, the Birmingham Children's Crusade, Freedom Summer, and the march on Selma. These students were central to these campaigns because they were more available than their adult counterparts were since they did not have as many responsibilities. In addition, Americans reacted much differently to pictures of violence against children than they did to pictures of violence against adults. The public had grown somewhat used to seeing pictures of violence against black adults, but seeing pictures against the youth of the Civil Rights Movement stunned the nation and generated more support for the movement. Many times these adolescents and young adults faced opposition from all sides, extreme violence, and even the possibility of death, but never backed down from striving to accomplish what they believed was right. Although overlooked through the years, youth were vital to the success vital of the Civil Rights Movement.