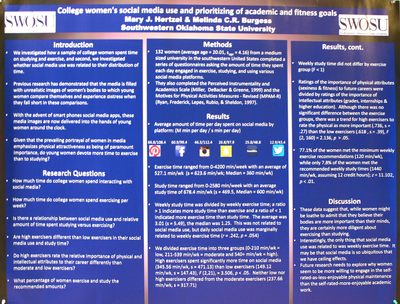 Introduction: First we investigated how a sample of college women spent time on studying and exercise, and second, we investigated whether social media use was related to their distribution of time. Previous research has demonstrated that the media is filled with unrealistic images of women's bodies to which young women compare themselves and experience distress when they fall short in these comparisons. Additionally, media is ever more accessible today than it has been. With the advent of smart phones social media apps, these media images are now delivered into the hands of young women around the clock. Given that the prevailing portrayal of women in media emphasizes physical attractiveness as being of paramount importance, do young women devote more time to exercise than to studying? Methods: 132 women (average age = 20.01, sage = 4.16) from a medium sized university in the southwestern United States completed a series of questionnaires asking the amount of time they spent each day engaged in exercise, studying, and using various social media platforms (Facebook, Pinterest, Snapchat, Instagram, Twitter and Tumblr). They also completed the Perceived Instrumentality and Academics Scale (Miller, DeBacker & Greene, 1999) and the Motives for Physical Activities Measures - Revised (MPAM-R) (Ryan, Frederick, Lepes, Rubio, & Sheldon, 1997). Results: Social media use varied dramatically from 0-2400 minutes per day with an average of 239.7 minutes per day (s = 335.1 min). Pinterest was the most frequently used (M = 66.8 min, s = 108.4), and Twitter the least frequently used (M = 12.9 min, s = 43.4 min). The range for the amount of study was quite broad (0-2580 min/wk, M = 678.4 min/wk, s = 469.5), as it was for exercise time (0-4200 min/wk, M = 527.1 min/wk, s = 623.6 min/wk). When comparing how many people in the sample met the recommended guidelines for exercise (30 min per day, 4 times per week) to the recommended study guidelines (2 hours outside of class for every hour in class; this would be 1440 min/wk for a 12 hour course load), we found that the women were far more likely to meet the exercise guidelines (77.1%) than the study guidelines (7.8%). There was not a relationship between the amount of social media time spent daily and the amount of time spent studying relative to the amount of time spent exercising (rsocialmediause x study/exerciseratio = -.098, p > .05). However, high exercisers (over 540 min/wk) spent significantly more time ((MHighExercise = 345.56 min/wk, sHighExercise = 471.13 min/wk) using social media than the low exercisers (under 210 min/wk), F (2, 121) = 3.506, p < .05, (MLowExercise = 149.12 min/wk, sLowExercise = 147.43 min/wk). Discussion: 77.1% of the women exercised the recommended time per week while only 7.8% of the women studied the recommended time. This is the most interesting finding, suggesting that perhaps women do recognize the increased value society emphasizes on their bodies over their minds, and as such are much more diligent in taking care of their physical selves.