Is Video Game Playing Related to Perceptions of Aggression and Threat? 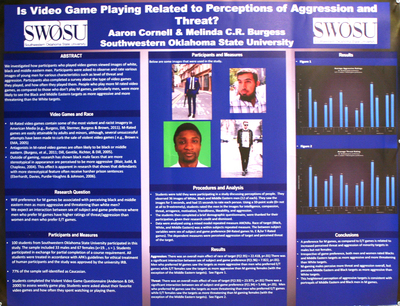 Introduction: Video games, particularly those rated M (Mature) have been found to contain some of the most racist imagery in modern American media (e.g., Burgess, Dill, Stermer, Burgess & Brown, 2011); additionally, the 'bad' buy in M games is more likely to be Black or Middle Eastern (Dill, Gentile, Richter, & Dill, 2005). Additionally, Black male faces that are more stereotypic in appearance are perceived to be more aggressive (Blair, Judd, & Chapleau, 2004). This is effect is so pronounced that defendants with more stereotypic features receive harsher sentences in legal settings up to and including more death sentences (Eberhardt, Davies, Purdie-Vaughns & Johnson, 2006). With these two things in mind we investigated whether video game playing would be related to people's judgements of Black and Middle Eastern male faces. Methods: 71 students, 52 F and 19 M (average age = 19.1, s = 1.4) viewed 36 faces (12 each of White males, Black males and Middle Eastern males); they saw each face for 5 seconds and then had 15 seconds to complete their ratings. They rated each face on a 10 point scale (0 = not at all to 9 = extremely) for how intelligent, compassionate, threatening, arrogant, motivated, friendly, likable, and aggressive they thought the person was. Following the images they completed the Violent Video Game Questionnaire (Anderson & Dill, 2000). Results: There were clear cut difference in how the students rated the photos (see below), but these differences were not related to video game playing which was our primary hypothesis. There was not a significant correlation between the type of game played (rated Everyone (E), Teen (T) or M), rs < 0.1, ps > 0.4, nor did people who preferred M games differ in their ratings as compared to those who did not play M games (ps > .05). In fact, the trend was consistently in the opposite direction. Both Black and White men were rated as more compassionate than Middle Eastern men, F(2, 58) = 16.298, p < .01. Both Black and Middle Eastern men were rated as more threatening than White men, F(2, 51) = 24.19, p < .01. Both Black and White men were rated as more friendly than Middle Eastern men, F(2, 41) = 14.77, p < .01. Both Black and Middle Eastern men were rated as more aggressive than White men, F(2, 58) = 16.298, p < .01. Discussion: The primary hypothesis, that game play (particularly M games) would be related to ratings of aggression and threat in the Black and Middle Eastern men was not supported. There were, however, several issues with the sample that might be related to this. First, there simply were not enough people in the sample who reported playing M games and most of our subjects were women who don't tend to play these games. Secondly, the weekend before data collection Paris was attacked by ISIS which could have altered the ratings in ways that are unclear.