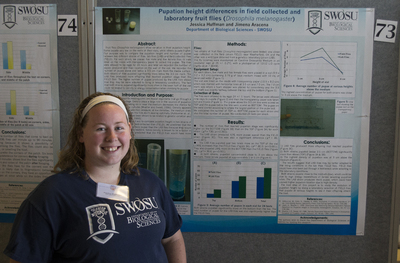 Fruit flies, Drosophila melanogaster, show variation in their pupation height. Some pupate very low in the walls of their viles, while others pupate higher. Our purpose was to record the pupation height and number of pupae in two different strains of flies (lab flies and field-collected flies) in order to see if there was genetic variation. For each strain, we placed five male and five female flies in viles lined on the inside with transparency paper. The flies were allowed to lay eggs for 24 hours and then they were removed. Nine days later, we recorded the number of pupae and their location on the wall of the vile. The lab flies produced more offspring that reached pupation stage than the field flies. We recorded the number of pupae above and below a 3.5 cm mark from the media surface. Both strains of flies pupated significantly more below the 3.5 cm mark. The higher number of pupae produced by the lab flies shows that they may be more adapted to living in laboratory conditions. The fact that both strains pupated significantly more often in the lower half of the vial could be related to energy conservation when climbing to pupate. This effect may also depend on density. A higher density may cause the larvae to climb higher to avoid the other larvae.