Cost of Courtship: Effects of Male-Male Competition on Harm Experienced by Females in Hyalella Amphipods 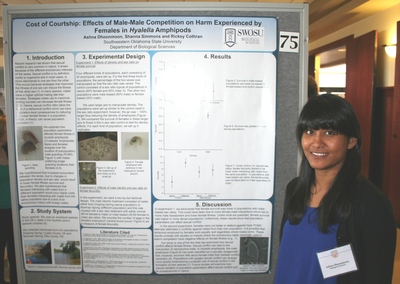 Sexual conflict over mating is common because males and females often have clashing interests over whether, when, how often and for how long to mate. This may result in significant costs to females, which can have negative consequences on populations. We hypothesized that females are more harassed and thus harmed in more densely populated areas. We also hypothesized that females would be harassed more in populations with male-biased sex ratios. In Hyalella amphipods, there is sexual conflict over the duration of pre-copulatory mate guarding. Males prefer to pair for a longer period than females. We set up populations of amphipods that differed in the relative proportion of the two sexes: 20% male (female biased), 40% male (typical sex ratio in nature), or 60% male (male biased). Separately, we also varied the size of the container to manipulate amphipod density. We predicted that female survival would decrease as the percentage of males and the density of the population increased. Female survival was ~65% lower in male-biased populations compared to female-biased populations. Contrary to our predictions, females survived better at the higher of the two densities. As number of females in a population decreases, the population has less genetic diversity and hence a greater risk of local extinction. It can be concluded that sexual conflict has a negative effect on population health.