The Effects of VSM-1 Expression in Mitochondrial Localization in C.elegans 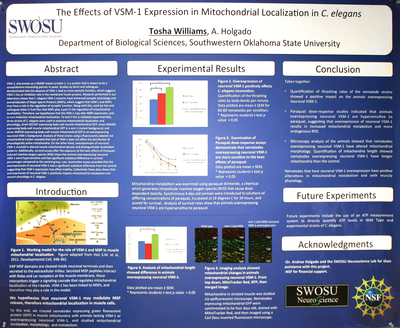 VSM-1, also known as v-SNARE master protein 1, is a protein that is shown to be a synaptobrevin interacting partner in yeast. Studies by Gerst and colleagues demonstrated that the absence of VSM-1 lead to more exocytic function, which suggests VSM-1 has an inhibition role in the membrane fusion process. Research performed in our laboratory shows that C. elegans VSM-1 mutants have enhanced synaptic physiology and overproduction of Major Sperm Proteins (MSPs), which suggest that VSM-1 and MSPs may have a role in the regulation of synaptic function. Along with this, work by Han and colleagues show in fruit flies that MSPs play a part in the regulation of mitochondrial localization and growth cone morphology. Therefore, we hypothesize that the VSM- 1 may alter MSPs expression, and in turn modulate mitochondrial localization. To test if this is validated experimentally, three strains of C. elegans were used to examine mitochondrial localization and physiology, strain SD1347 expressing body wall muscle mitochondrial GFP, strain AMH82 expressing body wall muscle mitochondrial GFP in a vsm-1 mutant background, and strain AMH56 expressing body wall muscle mitochondrial GFP in an overexpressing neuronal VSM-1 background in neurons. Analysis of these strains using a fluorescently labeled red mitochondrial tracker revealed that lack of VSM-1 does not affect the distribution of physiologically active mitochondria. On the other hand, overexpression of neuronal VSM-1 resulted in altered muscle mitochondrial density and distinguishable localization patterns. Additionally, survival assays after the exposure to the toxic effects of Paraquat-induced reactive oxygen species (ROS) show that animals overexpressing neuronal VSM-1 were hypersensitive and had significant statistical difference in survival percentages compared to the control group. Last, locomotion assays provided that the overexpression of neuronal VSM-1 had a significant statistical difference from the control suggesting that VSM-1 expression may affect movement. Studies testing whether ATP concentrations are linked to the mitochondrial differences along with variation in locomotion are underway via the use of the fluorescent ATP measurement system ENLITEN (Promega).