The Mythic Circle is a creative writing journal devoted to fantasy-inspired creative works; it has been published by the Mythopoeic Society since 1987, and earlier versions of the Society’s creative writing efforts extend to Mythril (1971 to 1980) and Mythellany (1981 to 1987). These journals have now been archived in their entirety at https://dc.swosu.edu/mythsoc/ through the efforts of the Society’s archivist, Phillip Fitzsimmons, and digital assistant Benjamin Dressler. All but the current issue may be downloaded for free, and the current issue may be purchased as a digital download or ordered as a print-on-demand title from Amazon.

In its thirty-three year existence, The Mythic Circle has benefitted from the creative efforts of a wide variety of authors and artists, and some have been repeat contributors, including some who have written for this issue: Joe R. Christopher, author of the Arthurian dialog “Six Years After the Wedding,” contributed to the very first issue of The Mythic Circle; S. Dorman, author of “Working Title,” imagining a conversation between C.S. Lewis and Mark Twain, contributed two stories to the second issue; David Sparenberg, author of the poem “Ritual,” became a contributor with several poems in Issue #11; Lee Clark Zumpe, author of the dragon tale “The Dreaded Tome of Urawn,” first appeared in Issue #15; Kevan Bowkett, author of “Troll,” first contributed a poem to Issue #37; Holly Day’s first poems for us appeared in Issue #40, Lawrence Buentello and Meg Moseman joined us just last year, and all of these authors have made subsequent contributions after their first. We have deep connections like these with many additional authors.

But we also welcome new voices, such as Mary Alice Dixon, author of the folktale “The Tree That Stood Forever,” Ella Wallsworth-Bell, author of the fantasy romance “Falling for a Cornish Maid,” Ama Kirchner, author of “What Iphigenia Knows,” drawn from Greek mythic roots, and DC Mallery, author of “Equuleus of Troy,” also amplifying a tale from the Trojan War. Welcome!

With the retirement of Gwenyth Hood after twenty-two excellent years, new editors Victoria Gaydosik (fiction and general management) and Nolan Meditz (poetry) have introduced a few new ideas: for the first time, this issue includes audio files of each story and poem read by a cadre of volunteers on quite short notice. The files will be available at https://dc.swosu.edu/mcircle/. If this feature proves popular, we hope to repeat and expand it in next year’s edition. Other plans include an index of every work published in Mythril, Mythellany, and The Mythic Circle; collections of individual writers’ complete contributions as separate volumes where permitted; expanded graphic elements; celebratory volumes for our upcoming 50 anniversaries; and possible discussion forums through our archive on the Digital Commons. We hope to draw together the tradition of excellence behind us and add new digital features of interest to our readers. We welcome your insights and suggestions. -Victoria Gaydosik, fiction editor and general manager

From the Poetry Editor: I am Dr. Nolan Meditz, an Assistant Professor of Composition Studies at Southwestern Oklahoma State University, and it is my honor to serve as Poetry Editor for The Mythic Circle. For Issue 42, both Dr. Gaydosik and I have endeavored to compile the works that best exemplify mythic narrative and lyric composition.

In my role as poetry editor, I aim to select poems I feel leverage mythic tropes to speak to an innate sense of wonder about the world and/or retell old stories in interesting ways. I also try to find a balance of voices in the submissions I receive in order to reflect the variety of tales, contexts, and emotions that act as the foundation of mythopoeic literature. Individual poems in this volume achieve these editorial objectives by recontextualizing Homeric epics, providing stark images of ruined worlds, mourning the loss of magic, and singing to the beauty of ritual and nature, just to cite a few examples.

It is my hope that the poems you read here preserve the wonder, the mystery, and at times even the weirdness inherent to the mythopoeic.

Mythcon 51: The Mythic, the Fantastic, and the Alien 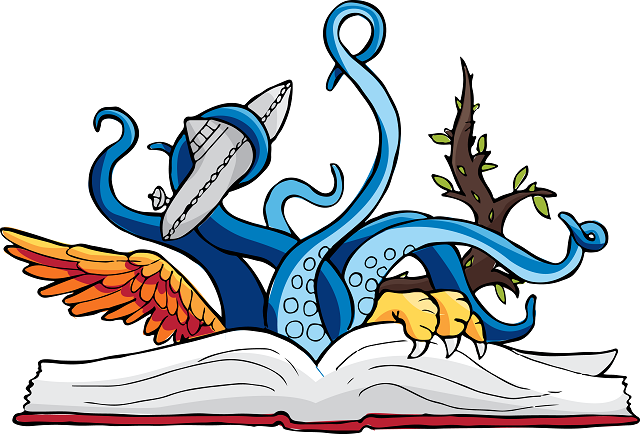